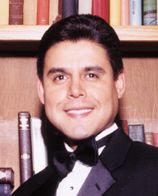 Paul is Cesar and Maria’s youngest son. He started with Miller Sherwood Printing in 1991. Paul’s best attribute was his commitment to serve our clients; he had become an expert in bindery and the press room which allowed Paul to have a great understanding of what our client’s needs were.

We will greatly miss you!

In 1965, our third child was born, Pablo. Upon his birth, his grandmother, Abuelita Mercedes said: “what a most beautiful face… that face belongs to Heaven”… and to Heaven he now belongs!!!

Even though Pablito was a quiet tranquil child, it did not stop him from telling his creative tales and at times carrying out his mischievous deeds. He also inherited a delicate state of health and was prone to accidents. At the age of six he fractured his arm while exercising on the monkey bars at school.

Life continued and at age fifteen, Paul was surprised and challenged by Hodgkin’s lymphoma, which kept him out of action for a full year, while he received chemotherapy and radiation treatments.

After a tough year of treatment and cured from cancer, Paul dedicated his life to sports. His became an avid water skier and an expert snow skier, he played tennis, baseball (beginning his own adult hardball team), played golf, he rode off-road motorcycles, as well as other sports.

Living his carefree life, one day while riding his bicycle he was struck by a careless automobile driver. A few months later, while water skiing, the sky cable entangled him and wrapped around his neck, chocking him while the boat dragged through the water, leaving his necked bloody and bruised.

He understood life as a precious opportunity to laugh. He would play tricks on many a child, for example, he pulled the pigtails of a close friends’ daughters, he would hide some kids in a closest or a trunk of a car. When Paul was found laughing, he was probably enjoying some mischievous deed he had just committed.

The years went by with a void in his life until he met Aimée with whom he united in holy matrimony, but not until exposing her to his mischievous stories and deeds. One day Aimée asked when will she meet his parents? He answered, “look… my mother was as fat as 300 pounds and her name was Hermenegilda; his father, called Pancrasio, was very skinny; his brother, Quasimodo, was almost fat like his mother; and his sister was a dwarf called Gumercinda.

After marriage, Paul lived a tranquil life with Aimée as they traveled the world together. They were able to see much of Europe, including: London, Paris, Rome and Amsterdam. They also visited the Bahamas, Hawaii, Mexico with many flights to New Jersey.

Twenty-seven years elapsed without a problem, Paul began to have stomach problems and upon getting the pertinent medical exams, he was diagnosed with esophageal cancer. For 18 months Paul had been under much care after the cancerous tumor and most of his esophagus were removed on January 2, 2007. And now it is like an illusion what is putting our son to the road to heaven… on FLIGHT 070208....

Thank you to our Clients: